The Nanaimo RCMP is investigating a brazen theft of purse from an unsuspecting woman. The incident occurred at approximately 5:30 PM on Monday May 2, 2022, while the victim was sitting in the food court situated in the Country Club Mall.

The complainant told police the last time she had her purse was while she was at the food court. When she sat down, she hung her purse over the back of her chair. When she got up to leave her purse was gone. She frantically searched the immediate areas with no luck then reported the theft to Mall security, and then to the RCMP.

A short time later, security found her purse on the ground outside JYSK. The complainant noted that everything was intact except her BMO banking card which she immediately cancelled.

On June 1st Mall security provided still images and video of the suspect, and of the actual theft. In the video, the suspect can be clearly seen carefully picking up the purse from the back of her chair then walking away with it.

The still image of the suspect captured on CCTV cameras shows her carrying a paperback book. Investigators believe that she may have been sitting in the food court prior to the theft and therefore someone may remember her, said Constable Gary O’Brien of the Nanaimo RCMP. 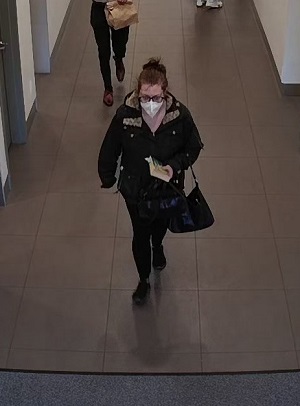 The suspect is described as follows: