The Kamloops RCMP Detachment is looking for witnesses and video, following a vehicle fire at a downtown business early this morning. 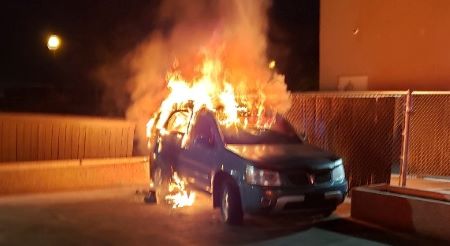 On Oct. 19, 2022, around 6:30 a.m., Kamloops RCMP frontline officers and Kamloops Fire Rescue were called to the 200-block of Victoria Street West where an SUV was fully engulfed in flames. The cause of the fire is under investigation.

Police have located and spoke with one person observed in the area at the time of the blaze, said Corporal Crystal Evelyn, Kamloops RCMP spokesperson. Officers are currently reviewing security footage to see if they can confirm and identify the presence of two other people who were also allegedly in the area and may have information relevant to the investigation. In the meantime, we are releasing an image of the vehicle in case anyone witnessed or captured dash camera footage of it before or during the blaze.

Anyone with video or information related to this incident who has not yet spoken with police, is asked to please contact the Kamloops RCMP Detachment at 250-828-3000.