Proactive patrols by a Kamloops Mountie led to the seizure of a significant amount of cash, suspected illicit drugs, and paraphernalia associated to drug trafficking. 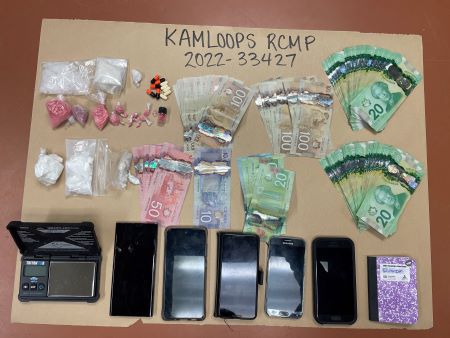 On Monday Sept. 19, 2022, just after 8 a.m., a Kamloops RCMP frontline officer conducted a vehicle stop at Columbia Street and 6th Avenue, to check the driver’s sobriety and license status.

Following a short investigation, the occupants, three adult men, two from Kamloops and a third from Celista, were arrested for possession of a controlled substance.

More than $5,000 in cash and 50 grams each of suspected Fentanyl, methamphetamine, and cocaine, along with five cell phones and other paraphernalia consistent with drug trafficking were seized, following a search of the vehicle.

When we consider the potential lethality of fentanyl and the other controlled substances seized during this traffic stop, investigations such as these play an important role in keeping toxic drugs off the street and preventing overdoses, allowing users more time to seek help with their addictions, said Corporal Crystal Evelyn, Kamloops RCMP spokesperson.

Those arrested were released on scene as part of the ongoing investigation and subsequent charge recommendation and assessment process.

Anyone with information related to this incident is asked to please contact the Kamloops RCMP Detachment at 250-828-3000 and reference file 2022-33427.