A white pickup truck associated to at least three police files, including stolen property reports, has been located and its driver, arrested.

On Sept. 15, 2022 a police officer was conducting patrols near Yew Street when he recognized a vehicle matching the description of one that had recently been reported stolen from the 700-block of Columbia Street West. The same truck had a license plate attached that had also been reported as lost or stolen, and was the subject of a suspicious vehicle complaint in Juniper Ridge on Sept. 13.

The truck was unoccupied at the time of its discovery, but thanks to a good description of its occupants provided from a person in the area, officers were able to find and arrest two people nearby, said Corporal Crystal Evelyn, Kamloops RCMP spokesperson. One of those people matched the description of the person photographed during the Juniper Ridge report. 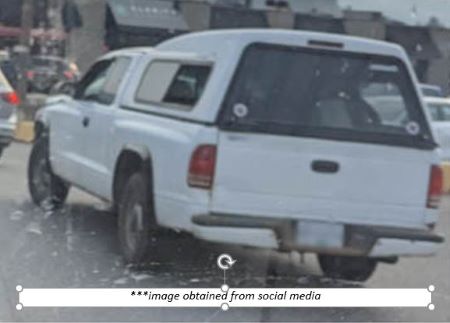 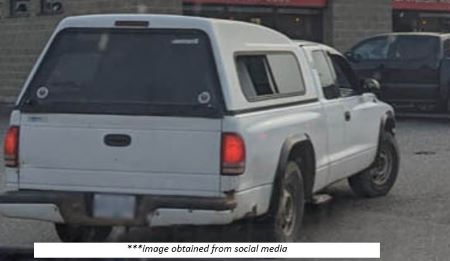 A man and a woman were arrested. The woman was later released without process, and the man received conditions and a court date as part of the ongoing investigation.

The photos and descriptions provided by the public were instrumental in helping police retrieve the stolen truck and license plate, as well as apprehend a suspect, added Cpl. Evelyn.

A utility trailer in Valleyview that was suspected of being associated to the suspicious vehicle was also investigated; it was found to have been legally rented and unrelated.

Police are releasing an image of the vehicle as it appeared on social media in hopes that other people may have captured surveillance footage associated to its recent activities or to thefts in the area.

Anyone with information related to these investigations is asked to please contact the Kamloops RCMP Detachment at 250-828-3000 and reference file 2022-32902.