Distracted driving campaign a success, in a manner of speaking

On Saturday September 24, 2022, Police Officers from Prince George RCMP’s Municipal Traffic Services and B.C. Highway Patrol, along with Commercial Vehicle Safety Enforcement Officers and RCMP Volunteers and ICBC partners, conducted targeted distracted driving enforcement. One again, police officers partnered with the City of Prince George for the use of their bucket truck, with a CVSE officer raised up as an eye in the sky. Four RCMP volunteers acted as spotters in the intersection, making observations at ground level.

These operations are very successful, says Community Policing Coordinator, Melissa Lang. Our RCMP volunteers observe a driver on their phone or using an electronic device and pass that information to waiting police officers. Our RCMP volunteers have attended court and provided evidence along with police officers and helped to obtain convictions for these type offences.

During this operation, officers noted that five drivers throughout the day had previously been stopped and issued a violation ticket for using an electronic device while driving. ICBC Road Safety and Community Coordinator Doug Mac Donald notes that these drivers could face additional fees from ICBC when they renew their insurance (see table). 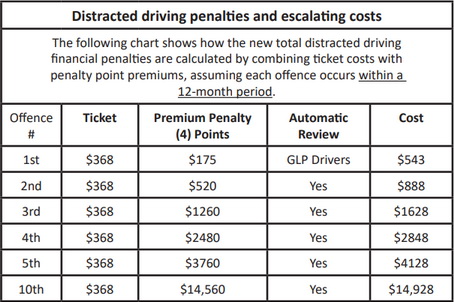 Throughout the day the following violations were dealt with by officers:

Police officers also issued eight Notice and Orders, which is a provincial legal document informing the driver that they, or the vehicle, do not meet the specific requirements of an Act or Regulation. 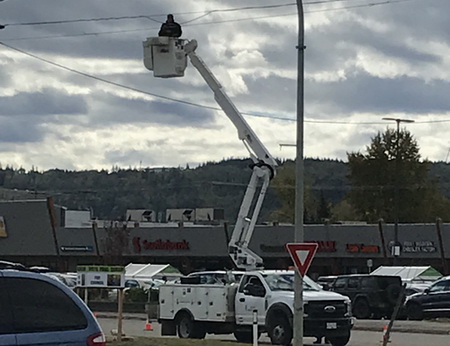 Though we consider this campaign a success in the one sense, because our police officers and the partner agencies located many of their objectives, this is not necessarily a success from a driver standpoint. As police officers, we would much prefer to have the safety of our roads increased because drivers are remembering to leave the electronic devices and other distractions alone, than to hand out so many violation tickets, states Cpl. Jennifer Cooper, Media Relations Officer for the Prince George RCMP.