Starting at 8:00 a.m., we were out making sure drivers were minding the speed limit now that school zones are in effect again for the school year. Thankfully, most drivers were aware of the speed zone change and were under that 30 km/hr, but there were a few drivers that needed a reminder today, states Cpl. Jennifer Cooper, Media Relations Officer for the Prince George RCMP. 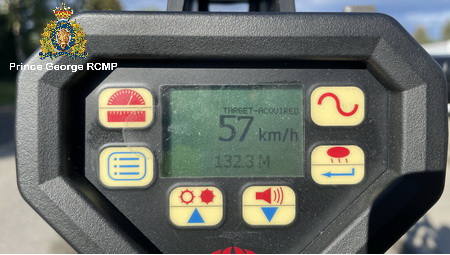 Though no one was found driving at excessive speeds through the school zone, several people were still driving quickly enough to receive a ticket. Prince George RCMP Municipal Traffic Services wants to remind drivers that in a school zone, even 50 km/hr is considered speeding and can result in a $196 fine and three points on your driver’s license.

Police and the RCMP Volunteers will be out in force in our community for the next few weeks, monitoring the school zones and helping to ensure that our youngest citizens get to school safely.