Kelowna, This Is What We Do

Over the past year, the Kelowna RCMP has received numerous complaints about a male suspect selling psilocybin (magic mushrooms), LSD and cannabis to teens in Kelowna. Through investigation, the police identified two male suspects who were selling the substances throughout Kelowna. The teens would contact the suspects through text message and receive a menu for the illegal substances. They would then arrange to meet with the suspects at various locations.

On December 9, 2021, the Kelowna RCMP Drugs and Organized Crime Section executed a search warrant at a condo in the 1700 block of Richter Street. Approximately 4 lbs of Psilocybin, 40 lbs of Cannabis, 1300 tabs of LSD, as well as $10,000.00 in cash and a 2017 Jaguar SUV, were among the items seized. This was a significant quantity of drugs seized and for comparison, our local high schools have anywhere from 1200 to 1800 students so 1300 tabs of LSD is almost enough for every student at one of our schools. 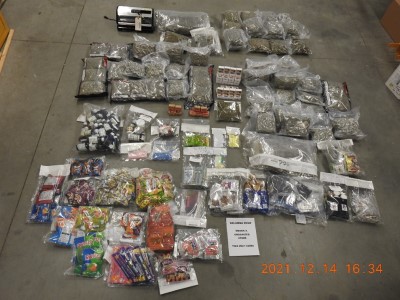 The two male suspects ages 37 and 50, were arrested and will both be facing the following charges under the Controlled Drugs & Substances Act and Cannabis Act:

This investigation resulted in a substantial seizure of illicit drugs that were being peddled to youth in Kelowna. Parents are reminded to monitor who their children are in contact with as the suspects in this investigation were not overly sophisticated, said Sgt. Desmond Kiehlbauch of Proactive Enforcement. Monitoring the communication of youth in similar situations could prevent them from consuming harmful substances.

For more information about the supports available to youth and their families, please contact Foundry Kelowna at (236) 420-2803 or visit their website at https://foundrybc.ca/kelowna