Make it a safe summer on the water 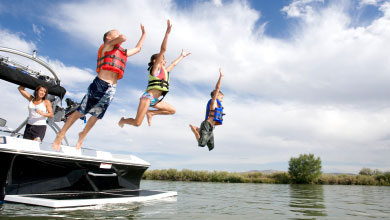 With the current warm weather, this is the perfect opportunity to ensure you are prepared for taking to the water.

Of the 397 deaths just over 50 per cent (200) were involved in recreational activities such as swimming and boating, 44.1 per cent (175) involved falls into water, motor vehicle incidents where vehicles landed in water or deaths in bathtubs; and 5.5 per cent (220 were occupational.)

Here are a few simple safety tips to remember:

There are safety equipment rules for all types of watercrafts, from canoes to yachts. In addition, anyone who operates a power-driven craft must have proof of competency. For more information, visit Transport Canada’s safe boating website.

Proof of competency can be any of the following:

The RCMP West Coast Marine Services and marine units of detachments with lakes and waterways within their boundaries are doing patrols to ensure boaters meet all safety regulations and people are boating in a safe manner.